I know… I know… I’ve taken WAY to long of a break from posting. So here’s a really quick post about – My mom’s blog! Check out someone who DOES post on a regular basis here!

This is what my mom has to say about her blog, “I would like all Christian women to pause regularly in the midst of their busy lives and think about what choices they are making with their time.  Are they living their lives in a way that will most profoundly influence the next generation to love and follow the Lord Jesus Christ? This means being there; fully (not distracted by too many activities or even church commitments). I am encouraging women everywhere to get a bit more introspective, to recognize their great worth in God’s kingdom, to learn to say “no” to false guilt and “yes” to joy and peace.”

Check out her inspirational articles and advice on practical living!

(In the meantime, I’ll get back to working on MY posts.)

For dinner tonight I just thickened up last nights beef stew by throwing in a couple handfuls of flour as I reheated it. Then I made some easy cheddar biscuits that I baked in a dutch oven on top of my beef “stew” – to create an instant… Beef Pot-Pie! 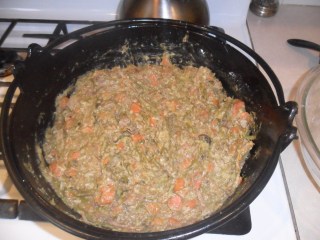 (I pretty much just tore pieces of dough off and flattened them into biscuit shapes that mostly fit together to cover the pot-pie. Then I baked the whole thing in the oven at 400 for about half an hour. So that’s an option too.)

Everyone loved this impromptu pot-pie!

This ends the Feed the Family Challenge. My dad is home now so he and Rosie will be taking care of feeding the kids tomorrow! Rosie has plans for breakfast that involve using up a bunch of frozen berries and some spinach…

Keep an eye out for my next “mini series” – Why Fat IS Good For You!

Success! This was easy and fabulously tasty… Chili Pie! My sister helped me make corn bread (she even found a good recipe in her Boxcar Children Cookbook by Diane Blain), and we topped a pie pan full of leftover chili with the corn bread batter. 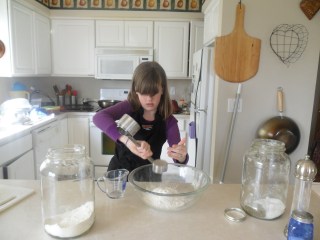 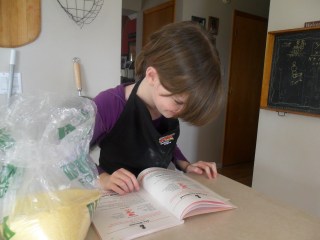 Here is the recipe she used… 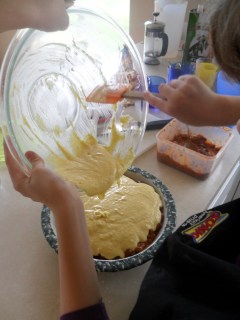 It did take a while longer then expected to bake (the chili was cold and I think that was a big factor), but the end result was worth the wait! We topped each bowl full with grated cheddar cheese and the whole thing magically disappeared, so fast in fact that I almost didn’t get a picture of the end result.

Cereal! I know… I know… Easy and boring. But there’s only so much you can do without eggs, or bread, or breakfast meat, or… I think you get the idea. Thankfully there is plenty of coffee!

Like Loading...
Remember that rhubarb soup I mentioned earlier?? Well… it stayed soup. What do you do with liquid dessert? Make it look like you planned it that way! And that’s just what I did. So – this “soup” consists of chopped up frozen rhubarb, frozen summer strawberries, frozen raspberry puree and tapioca flour (one of the missing ingredients I mentioned earlier was any type of normal thickening agent).

I patted my mixture of brown sugar, melted butter and flour into little ramekins and baked them for about ten minutes in the oven. 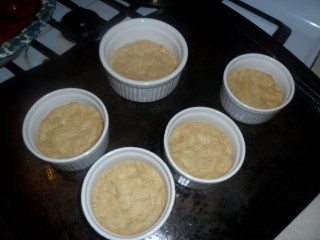 Filled the ramekins with “rhubarb soup”, returned them to the oven for five minutes and…
Voila!
Happy children!

This soup was made up almost entirely of freezer stuff!
I used up:

2 qt bags chopped asparagus
1 qt bag carrot “coins”
one large container of “mystery” soup (turned out to be mostly beef and mushrooms from a crock pot roast)
the rest of the rump roast from yesterdays dinner
the rest of the large can of cream of mushroom soup from yesterdays lunch
leftover broccoli and rice soup from earlier this week
some other random leftovers that just happened to contain broccoli, beef and rice

In an attempt to do more then just dump it all in a pot, I diced up the rump roast, tossed it with some flour and salt and pepper, and fried it in some hot olive oil. It gave the meat a nice crunch even after it was added to the soup! But after that – I literally dumped everything in a big pot, added a few cups of water and just let it bubble away. I have to say – I thought it turned out to be pretty good. And these leftovers are going to make a fantastic beef pot pie tomorrow!

Dessert is in the oven – although it looks like we might be having some more soup. I’m attempting to make a kind of rhubarb strawberry crumble to use up some more freezer stuff. Only problem in we’re missing some of the key ingredients for a crumble… and there is way to much liquid since everything was frozen. If I leave it in there long enough it might turn into something that doesn’t have to be eaten with a spoon! I’ll keep you posted…

Ok. For meal number four (Thursday lunch), I sort of cheated. Only because Kealen made a request. For lunch we had… Corn dogs and tater tots! Technically it still helped clean the freezer out.
Tonight though, I’m using up about a million little random bags of frozen veggies from last summer – along with some mystery soup –  and making the best darn beef stew you’ve ever seen! So stay tuned…

Now – I know pancakes aren’t very earth-shatteringly original, and they don’t use up anything in the freezer (unless you’re my friend Sue – in which case your freezer is full of different kinds of flour), but the kids loved them! After I’d cooked up about half of the batter, I decided I should be “makin’ banana pancakes”. Nothing beats banana pancakes with home-made strawberry jelly!

I found a rump roast, dried and canned beans and a couple of forms of canned tomatoes. What does this make??? Chili!

All of the kids loved it! (Even the little one with a loose tooth who started dinner by complaining about not being able to chew even a banana…)

*Please note that this chili was a way to use up some random leftovers and canned goods. Canned goods can be adjusted to utilize what you have on hand.*

My challenge for the next couple of days is this… feed myself and four hungry active kids three meals a day while my mom is in Portland at Hannah’s debate tournament! Oh – and try to use up random food that’s in the freezer at the same time.

Meal Number One – Wednesday Lunch
I arrived at my parents house about an hour before the younger kids had to be at their friends house for a weekly play date. (That was bad planning on my part.)
I scrambled through the cupboards trying to find SOMETHING to feed them that could be thrown together quickly and keep them going for most of the afternoon. Solution? Tuna and Rice Casserole!

Preheat oven to 400.
Throw cold rice in a 9×13 pan, break up any big chunks so it will heat evenly. Dump undrained tuna on top of rice and spread out to cover evenly. Sprinkle seasonings, garlic and salt evenly over everything. Plop cream of mushroom soup across pan and spread to cover. Throw in oven and cook until nearly hot. Pull out of oven, stir around to combine all ingredients and sprinkle top with cheese. Put back in oven until cheese is melted and casserole is completely hot.
Serve!
Encourage the one child that doesn’t like it to eat it anyways ’cause that’s all she’s getting and then rush kids to car and off to friends house!

Stay tuned to see how I respond to this challenge and what is unearthed from the freezer!