Here begins the grand adventure we have undertaken. Cook a meal from every country in the world. I know this isn’t a new idea, but we are very excited! Let me introduce a special guy…my boyfriend Dan! He is the owner of Black Market Hot Sauce Company as well as a top-notch cook at a cool little local restaurant. We obviously both love food. We’re also both pretty bad at geography. The solution? Cook a meal from every country and learn a little about each country, and hopefully it’s location, in the process! (Don’t tell anyone but, we’re mostly just excited about the whole trying-new-food thing.)

I feel the need to apologize here for the photo quality. Hopefully it will slowly start improving. I learned today that my man has a knack for getting a decent picture in horrible lighting!

Why start with Afghanistan? Uh…’cause we’re so creative that we decided to start alphabetically. Next up – Albania.

The food we made today was amazing! Afghanistan was the perfect country to start with (how convenient). Even after researching recipes, I didn’t really have a good idea of the unique flavors and dishes contained in Afghan cuisine. I know the two dishes we made did not even begin to scratch the surface.

It was a little challenging to find good recipes for Afghan dishes. Some were impossible to follow, some were overly vague, others sounded like they could have originated from any middle eastern or Asian country. In the end we decided to take several recipes for one dish and combine them. I’m hoping we didn’t step on any toes in the process. Regardless, the final dish was delicious!

Word to the wise – if you decide to make these recipes, you will be dicing a lot of onions. 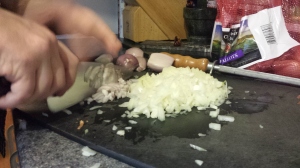 The combination of yogurt, spices, lime juice, plums, and ginger in the korma was unexpected and completely different from any other curry dish I’ve had before. It was slightly spicy as well as tangy, savory, and sweet. This dish was great with our bread and it would have been perfect served with a rice dish. You can find our recipe for chicken korma at the bottom of the post.

The mantu were surprising simple and well worth the extra time it took to put them together. The filling was simply onions and spiced meat. They were served with a meaty tomato sauce and a garlicky yogurt sauce and garnished with mint. The flavor combination of mint, yogurt, tomato and onions was my favorite part of the whole meal! Mantu are generally made for special occasions in Afghanistan because of the extra time they require. We followed this recipe from Lucky Peach. We used a combination rice cooker/slow cooker to steam our dumplings but other cooking methods (including boiling) would work just fine.

No Afghan meal would be complete without tea. I’m sure I made it incorrectly but I made a simple chai tea with cardamom, cinnamon, ginger, and green tea. It was very light and aromatic. All in all, our first meal in this experiment was a huge success!

Serve family style with a garnish of cilantro and lime wedges.

I would love to hear from anyone with experience in Afghan cooking and food!